A year ago, Ebiquity published a report called TV at the Tipping Point, which suggested that linear TV will lose it’s ‘ROI advantage’ over other media channels due to declining reach and subsequent price inflation. The report had some flaws. For example, it ignored the fact that TV viewing had recently seen four years of consecutive growth and was still higher than it had been before the global recession in 2008. It also largely ignored the rise of Broadcaster VOD, which has alleviated the decline in traditional TV viewing. Finally, it assumed that people’s viewing habits won’t change as they age which we know is not true. Despite these flaws, it did highlight an unavoidable truth – that linear TV viewing is in decline.

Last week Ebiquity published a follow-up report called Mind the Gap, which explores how advertisers can supplement TV with online video to close any gaps in reach. One of the most interesting findings in Mind the Gap is Ebiquity’s projection for the change in TV viewing habits of different age brackets over the next 6 years. Unsurprisingly there is a radical difference between young and old. For example, Ebiquity predict that by 2026 linear TV impacts for 18-24s will be only a fifth of what they were in 2010, while for viewers over 55 TV impacts will grow by 20% over the same period.

A consequence of this trend is that for advertisers targeting a mature audience, TV is becoming an ever more efficient medium. It is now easier to avoid wasted viewing from younger people when planning a campaign for a brand with an older customer base. To illustrate this, the below chart shows the percentage of total commercial TV impacts that were viewed by over-45s in each year since 2010: 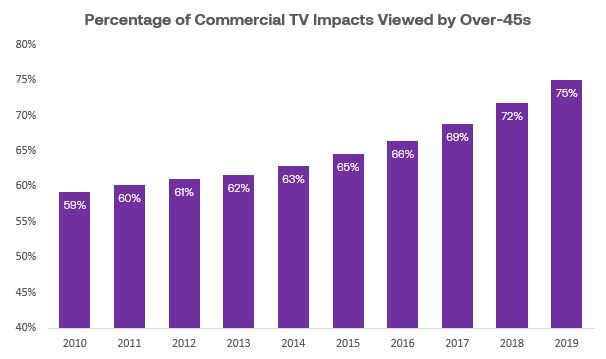 It’s clear to see that is now easier than ever to target over-45s on TV, and if you couple this with the UK’s increasingly ageing population, the doom and gloom surrounding linear TV viewing is actually quite misplaced for so many advertisers who covet often ignored older audiences. It’s likely that if your target market is comprised of over-45s, TV’s ‘ROI advantage’ versus other media channels will not only be maintained in future, it will likely increase.

Another interesting insight from the Mind the Gap study is the difference in the value of a TV impact compared with an online video impression. It’s been said many times that the rise in online video consumption will mitigate against the decline in linear TV viewing, allowing brands to reach the same number of people across the new video landscape. Whilst this may be true, the issue with this is that television has such a dominance over every other media channel when it comes to the attention paid to each advert – as demonstrated by Ebiquity’s chart below. This means that simply substituting TV reach with online video reach, on a one-for-one basis, is likely to result in a decline in campaign effectiveness, so it is crucial for advertisers to make sure they prioritise TV for as long as possible to capitalise on its position as the most effective and profitable media channel. 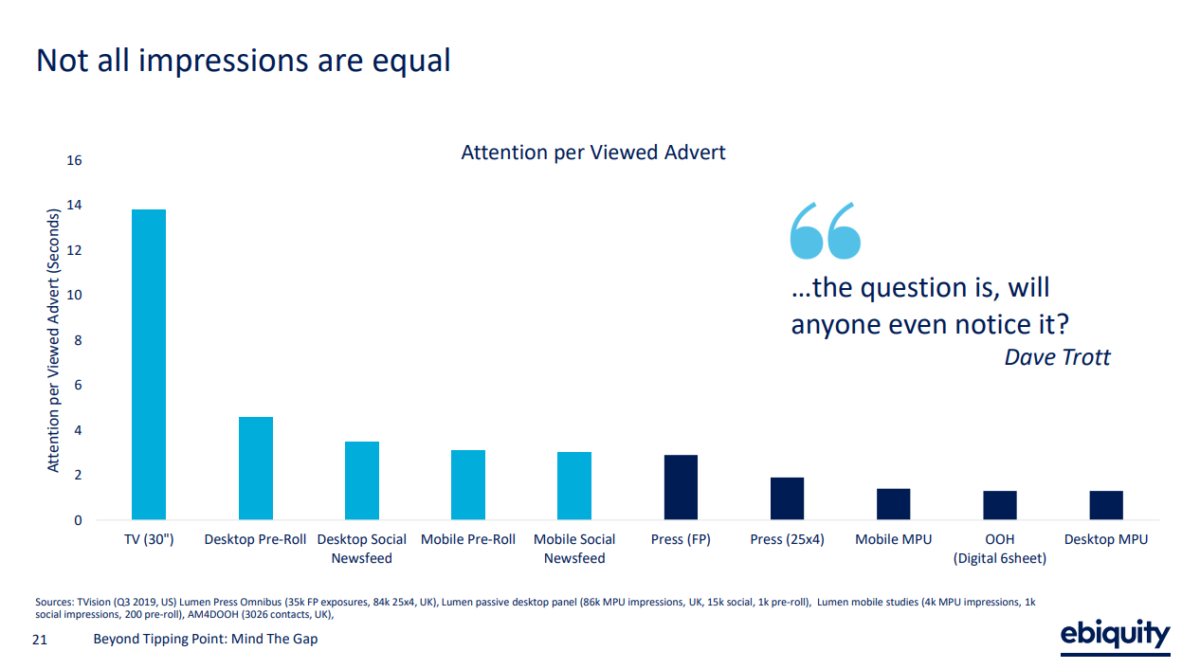 To the chagrin of millennials, wealth continues to be further concentrated by Gen X and baby boomers making these increasingly lucrative potential markets. When combined with the viewing trends evident in TV audience data a strong argument emerges for brands that target older or affluent audiences to develop their linear TV strategy and increase investment.