The last three months have provided one of the greatest growth opportunities in decades for performance TV advertisers. We have helped clients make hay while the sun has shone – with those who were able and brave enough to invest more reaping significant rewards. Volumes of new customers recruited from TV investments have in some cases more than doubled, and costs per new customer have fallen significantly.

This increase in effectiveness has been powered by three R’s: Revenues falling; Rising audiences; and Response rates that have, on the whole, held up to the same levels as seen in Q1 this year.

Whilst total TV advertising revenue fell by 45% YoY in Q2, viewing rose by more than 20% at its peak in April, driven by more viewers watching more hours each day. Viewing patterns in lockdown resembled those at Christmas, with lighter viewers recording a massive 51% increase, and daytime audiences up by 60%-80%. And just like Christmas we all watched much more in family and household groups, recreating shared viewing levels unseen for decades.

Unfortunately, all good things must come to an end, and this particular party seems to be petering out. For those of you who have made the most of it and partied hard these last three months the question is how to avoid the hangover that almost always follows largesse?

So, what is likely to happen to the market in the next few months? And what prophylactic planning measures can you put in place to ensure you protect the effectiveness of your TV investments?

Firstly, audiences are going to return to near-normal levels.

The gold lines on the below chart show viewing to Barb TV channels over the last 7 days. Viewing levels jumped up year on year (solid gold line vs dotted gold line), but have been steadily declining across May and June, and as of July 12th are only up 3.1% compared with 2019. We expect this trend to continue, and audiences to gradually return to near normal. 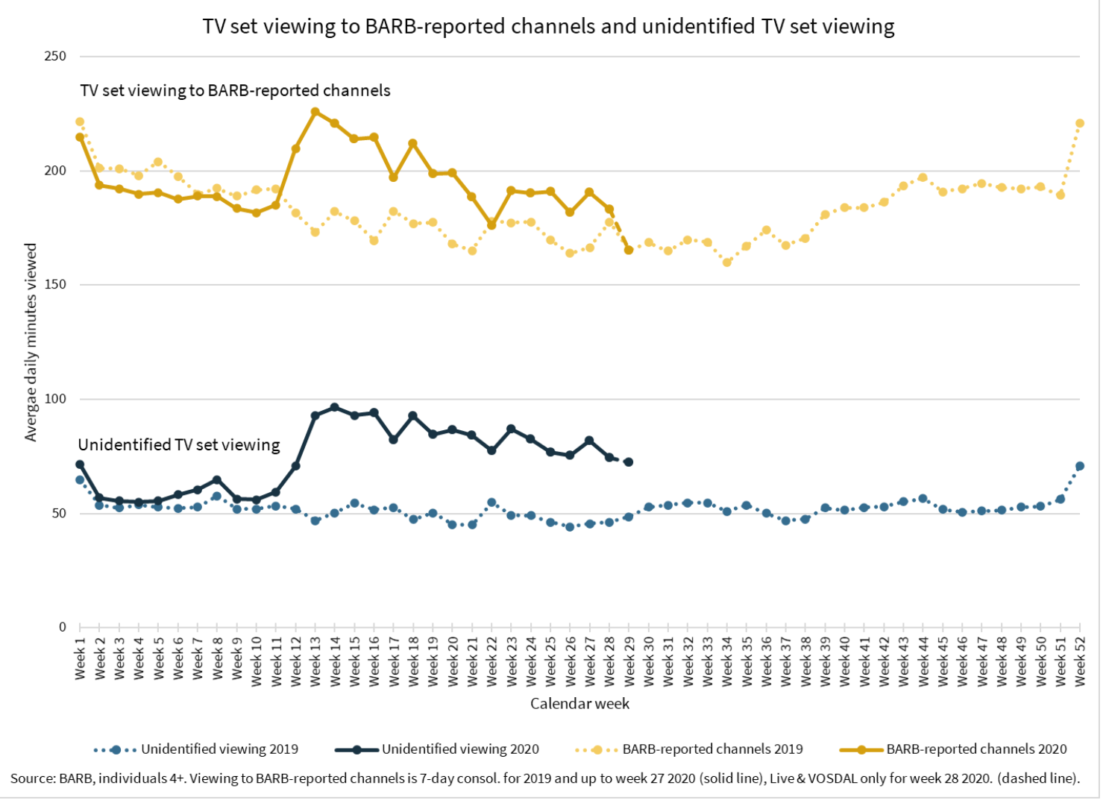 The blue lines above are ‘unidentified set viewing’, which in layman’s terms means SVOD services and TVs that are being used for gaming. This is up by 50% year on year, is declining only slightly and slowly, and now represents 30% of all viewing hours (for the 16-34’s it’s now half of all viewing hours). This will grow in the short to medium term as repeats account for a larger proportion of the linear schedules.

Secondly, the days of a 40% decline in demand are over. We expect ad revenues to be down less than 20% in Q3 and less than 10% in Q4. This will be fuelled by the rebooking of more than £400 million of revenue deferred (i.e. paid for but not aired) from April and May alone. As a result, the remainder of this year will see prices rise steeply from the depths they sank to in Q2.

So, what mitigating steps can clients who invest in performance TV take to avoid that morning after the night before feeling?

Well, firstly keep perspective and don’t panic. TV will still represent huge value, with autumn prices likely to reflect those of over five years ago. Your investment question should not be around which other channels to move TV budget to, but rather about how best to optimise the effectiveness of the remainder of this year’s budget.

The answer we believe is in the three E’s. Early; (not) Everywhere; and Extend.

During lockdown, we have recommended keeping budgets flexible and taking advantage of the short-term falling market. The opposite is now true. Be prepared to plan and commit Early as we enter autumn.

(not) Everywhere:  The flexibility that each sales house has in discounting this autumn varies according to the amount of deferred revenue they now have to deliver, and with their audience delivery. The good thing about higher viewing levels is that 1+ reach is relatively easy to achieve, and thus schedules this autumn will still be as effective for a response without having to spend with all stations.

The last thing to consider is to Extend. This won’t be an option open to all, but those advertisers who can increase investments with TV this autumn will find strong reciprocal support from media owners. Ironically, one of the ways to mitigate a hangover is to have another drink on the morning after. Those of you who have benefited from investing more this spring may well find it’s a strategy that pays increased dividends this autumn as well.