Back in 1967 when John Poppy first coined the phrase, the reality was the distance between old and young was more of a chink than a gap – the old were defined as the over thirties and the young just a decade behind them. The worry was that their politics, wants, and tastes were different. But the truth then, and over the following five decades, was that they actually saw the world through the same lenses. The way they received their news and views of what was happening and what it meant for them and others was a shared experience.

Back in the 1980’s, this was predominantly down to lack of content. There was only one commercial television channel; just 1,200 newspapers; only 300 magazines; no internet, and no such thing as a smart phone. We all saw the world through the same window because it was the only window available.

By 2010, two significant changes had occurred. Firstly, the introduction of than 1,000 TV channels; 2,500 newspaper titles; 8,054 magazines meant an influx content. Secondly, we were spending more hours consuming media each day than we spent at work or asleep. We weren’t watching the same programmes, or reading the same magazines, but old or young, we were all consuming the same edited and regulated media channels.

Fast forward to 2021 and that is no longer true. It turns out that Margaret Thatcher was right, there is no such thing as society, or certainly an all-adult audience anymore. Figure one below shows how rapidly this has changed – only five years ago, the over 55’s and the under 34’s spent 58% of their media day on the same channels. By April 2020 this had fallen to just 8%.

Figure One: The young and the old no longer consume the same media channels

How this could have changed so rapidly is explained by figure two, showing the amount of media time each day spent on different “devices”. Most of these are actually devices (laptops, tablets, smart phones, speakers, consoles & TV sets) but we also include physical print in the form of mail, newspapers & magazines.

It turns out we don’t have a channel gap; we have a platform gap. The young spend 75% of their media day on internet connected devices, while the old spend 80% of their day with non-connected platforms like TV, radio, and print.

Figure two: Because the Old and the young are no longer using the same devices to consume media 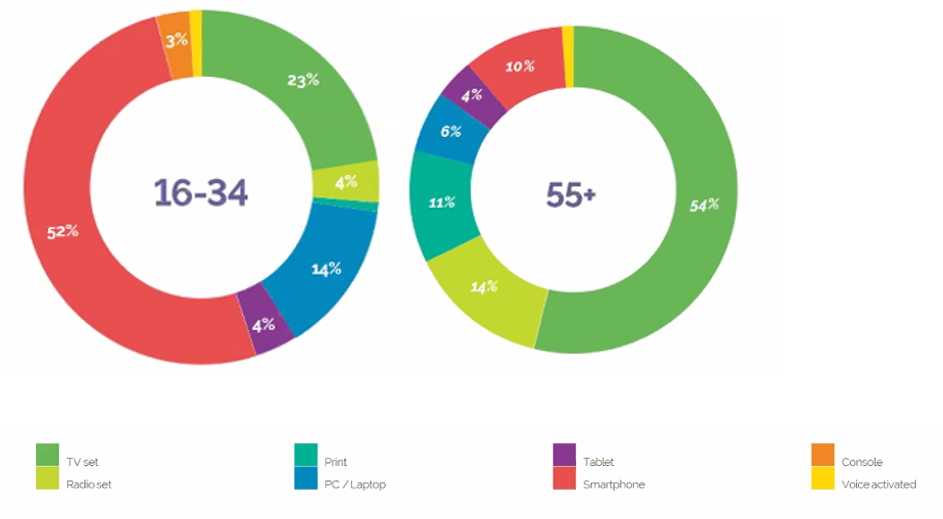 In 2020 Boomers, Millennials and Gen Z’s are not only looking at the world through very, very different windows, but worryingly, are also seeing different worlds. Figure three below shows (just for commercial media, but that’s the majority of all our consumption) the time each generation spends with different media channels, from physical print to online magazines; broadcast TV to streamed radio; OOH to social media.

Our over 55’s devote 80% of their media hours to TV, radio and newspapers, all of which the content is regulated, and Ofcom and co have a remit. On the flip side, our 16-34’s spend 70% of their time in the unregulated wild west of social media, the functional internet and “other” online video. All places where QAnon reign supreme.

Figure three: The most worrying gap of all- regulated vs unregulated content 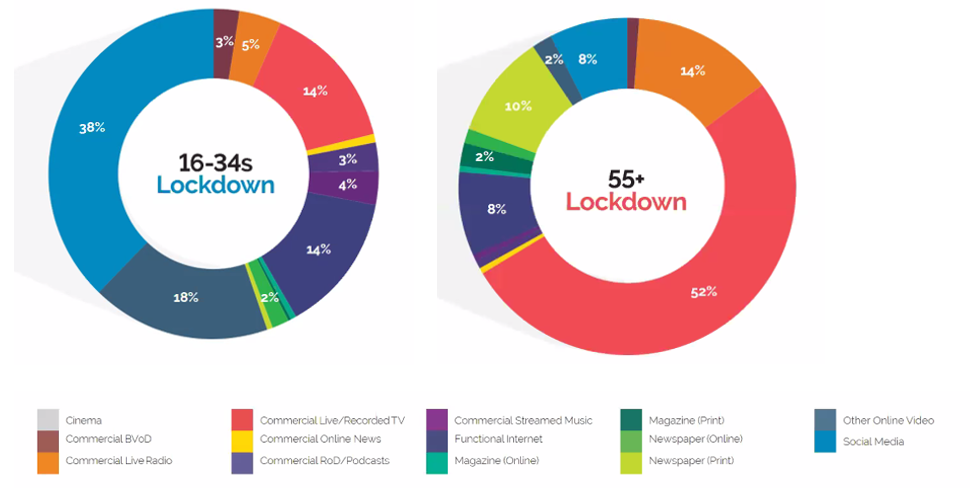 What does this mean for advertisers in 2021?

Well, the simplest and most prosaic point is that there is no such thing as an all-adult media schedule anymore. If you target and report against all adults, you will effectively deliver 35–54s and will miss either the young or the old or both.

And there are other considerations beyond just media selection. For some channels there are concerns that audience research doesn’t reflect the reality of consumption now. OOH audience measurement tracker, Route for example is effectively ignoring 2020 and replacing six months of lost data from March-Aug 2020 with data from 2016/2017. Quite how data from what seems a different epoch will be valid is lost on us.

What is perhaps most fretting though is the societal and messaging implications. The gap can be summed up by #Boomer that trended on Twitter in March 2020 and made a return in January this year. The young are angry, and possibly rightly so. Figure four demonstrates the relative impact of furlough on young and old.

17.5% of the under 34’s claimed to have been furloughed at the end of last year, with many more losing their jobs or on short time. That’s 2 ½ times the impact of furlough on the older group and as furlough ends in spring the real reality will bite.

And it will bite at the same time that another reality dawns. Young people won’t be able to take a “Gap year” and go travelling. Figure five shows that 50% of the under 34’s are currently saving in order to be able to holiday or travel in 2021 – something that was still a hope back at Christmas.

Figure five: The young are saving in hope of travelling this summer

Likewise at Christmas, as figure six (last one, we promise) shows, the young were also resigned to not getting the vaccine any time soon with 60% not expecting to be vaccinated until after September and the end of the summer festival season. In contrast at the time this question was asked, 2% of the over 55’s had already been vaccinated.

Figure six: % of 16-34’s vs over 55’s expecting vaccine before May or after September

Fast forward to mid-February, and we know that all the over 50’s will be vaccinated by May and the young will indeed have to wait until September. It also seems that overseas travel will be subject to “taxes” this summer, in the form of quarantine and tests, both paid for by the traveller. Taxes that the young can least afford.

Many of the older group are footloose, vaccinated, have bank accounts swelled with savings from the last 12 months enforced idleness, and have the time and assets to resource a period of quarantine in hotels or at home. So, on one level, we completely understand Virgin Atlantic running this ad in January… 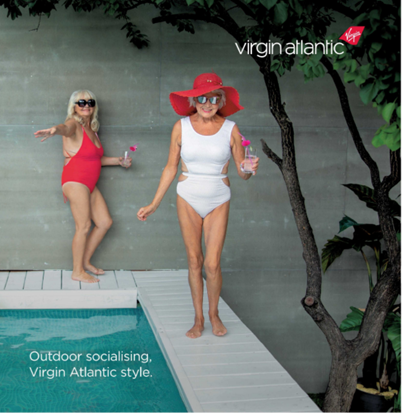 They placed it in The Sunday Times, which one could argue is unlikely to be seen by the younger audiences that images like this will offend. Clearly from a commercial and immediate performance point of view this tactic makes sense – it’s clear messaging to a group who have the means to travel, and pretty much their only hope of generating near to medium term revenue.

From a long-term brand point of view this message carries significant risk. Alienation of core audiences who have been your bread and butter for decades in search of income this quarter strikes us as asset stripping your brand.

So, what’s our advice?

As advertisers and agencies, we have to carefully construct our media investments to ensure we reach and engage different life stage groups. It will no longer happen by default, even in the highest reach media channels. That gives us the opportunity to tailor messaging to the age groups in their different media ecosystems.

The opportunity is to do so in an inclusive way, that builds across generational tribes who love your brand. The risk is, that by chasing short term performance revenue from the old in this first half year, we alienate the young who see us ignoring and even exacerbating their grief.

We need to face the reality that for the first time ever, there is a generation gap in media. But done correctly, we have the opportunity to bridge that gap with brands and messaging and avoid leveraging it into a wider chasm.