Christmas is the magical moment of the year. A time of ritual, nostalgia, and “doing things properly.” It’s the core revenue driver for retailers both on and offline, the high point for hospitality and entertainment. And last year, it just didn’t happen. Instead, Christmas was cancelled and the New Year’s Eve parties well and truly pooped.

The real surprise was in just how many of us complied with Santa’s stay-at-home message. Figure one below shows that less than 1/3 of us broke the rules to visit another household on Christmas day, and only 1 in 20 of us went out to party on New Year’s Eve.

Figure One: few of us had a proper Christmas, and almost no one partied at New Year

As a result, the overwhelming sentiment from qualitative research and casual conversations is that “we want a proper Christmas this year.” But what does “a proper Christmas mean”? And what proper prior preparation might a performance media advertiser undertake to maximise their media investments’ effectiveness this Christmas? 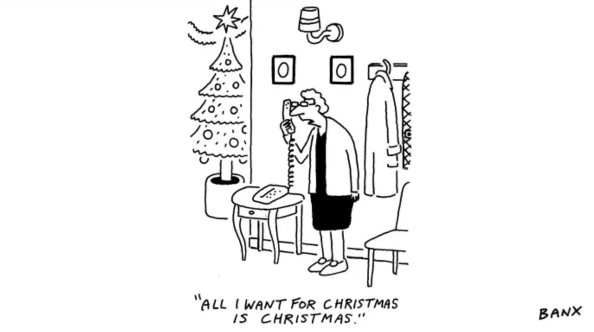 Come December, the Kantar world panel recorded a 15% year-on-year growth in spending on Supermarkets Premium ranges, ahead of all grocery growth in the month.

Applying search and social listening into consumer language around your sector and Christmas will be time and effort well spent, and the earlier the better.

2. Recognise that luxury won’t be for everyone

Figure two, below, shows the change in amounts we spent on Christmas presents last year vs. Christmas 2019. We have split out pressie spend into bands, from nothing up to an extravagant more than £1,000.

Last year was a year of extremes, with 20% more of us spent nothing on presents, c.10% more spending over £500 or even over £1,000, and mid-market spending between £50 and £500 contracted. Similar patterns were also seen on spend on Christmas food and drink.

Figure two: Change in spend on Christmas presents 2019 vs 2020, by expenditure band.

In most markets, we have found audience segments that have prospered in lockdown, accumulating savings and feeling affluent and able to spend. But, equally, with unemployment forecast to hit 5.7% in the three months to Christmas 2021 as the furlough scheme finally ends, there will be audiences who will be feeling the squeeze and spending accordingly.

If you haven’t asked the question, “Which of my audiences will have money to burn and which will need a value offering this Christmas?” now might be the time to do that work.

Much was made of the switch to online shopping in 2020, especially in groceries. The end of lockdown has not seen a return to the high street, with many of us preferring home delivery to shlepping around. We expect the same to be true at Christmas this year.

Figure three, below, shows that 40% fewer of us shopped for presents in store last year compared with the year before. All online channels made gains on the back of real-life losses, with the clear winner being mobile. Expect this switch to step forward again in 2021, with implications for services, travel, and charities as well as present buying this December.

Figure three: As with all other shopping in 2020, Christmas present buying moved online

4. Timing (as always) is everything

Last year was a Christmas everyone was looking forward to before the grumpy Grinch stole it. It was going to be the perfect fairy tale ending to a perfectly dreadful year, so everything needed to be just right. As part of that, we saw much more pre-planning and pre-purchasing than usual. Figure four below shows the date we had completed (or mostly completed) our Christmas present shopping.

Figure four: More than half of us had finished Christmas shopping by 7th December

We were much earlier than usual, with little last-minute rush to the shops. This year, we see most people will be doubly determined to have the perfect Christmas and dedicate the time they would have spent commuting and pushing through crowded shopping centres to surfing and searching. And it’s something that nearly 40% of us can do in-between ‘meetings’ for at least three days a week in this world of hybrid work.

Two pieces of advice stem from this insight. The first and obvious is that if you are selling gifts, go early and go hard to ensure you don’t miss the buying window. The second and less obvious is the “deposit” effect. Once the shopping is done and the pain of spending has died down, some consumers may be prepared to spend again. And if you can offer a discretionary something for them to spend on, ideally in the last two weeks before Christmas, then you may find they will open their wallets again for that little bit extra.

Thoughts may turn to travel ahead of Christmas this year, and charities might consider upweighting these last two weeks-those who bought early last year are significantly more likely to give to both UK and overseas charities.

5. Whenever you decide to invest, expect there to be more competition

In many ways, 2020 was a year like no other, and that was the case with media pricing. The fall in demand for media space allowed many agile performance advertisers to scoop up ad opportunities to bored and affluent consumers stuck at home and prepared to buy. As a result, our best and bravest clients saw sales and new customer numbers double in 2020 compared with the year before.

Unfortunately, history will not repeat itself this Christmas. Chart five, below, shows the total investment in all UK media by week, from October to the year-end, for 2020 vs. 2019.

Figure five: Demand for advertising fell in every week October-December bar one

The amount that all advertisers invested in UK media in weeks 40-52 of 2020 fell by around a quarter compared with the same weeks in 2019, except for week 49 that actually grew year on year, with 47% more demand. We attribute this to the insight in the previous section – that consumers can be tempted to spend just a little bit more once their big buys have been completed.

That’s our first insight here. The second is that what came down will go back up again. Expect demand for media to be intense this festive season. There may be last-minute bargains in the high street, but there won’t be in the media market. The best value will go to those prepared to commit early and commit fully.

6. Media prices will be driven up by a shortage of supply as well as increased demand

Last year’s record low prices for eyeballs at home were driven down by us consuming more media as we had little else to do. Chart six below shows how 2020 bucked the trend of long-term decline for offline media impressions.

Whether it’s the Dr. Who special or the 98th rerun of the Great Escape, Christmas week has always been the heaviest viewing week of the year for TV.  It’s one of those rituals that are bound up in the magic of Christmas. We plan our schedule (sales of the Radio Times quintuple for the Christmas special!), settle down on the sofa, and watch until we can eat no more chocolate. As a result, we watch about another four hours of television in Christmas week compared with the rest of December.

But as Netflix, Amazon, and Disney have appeared on the scene, we have watched less live broadcast television at Christmas each year.

Unfortunately, these gains will prove to be short-lived, as real-life will (hopefully, please!) intervene, and parties, games, family squabbles, and all sorts of 2019 things will bring viewing levels down.

And it won’t just be TV that will be short(er) of audiences. We are travelling again, but not on public transport, and not as much to city centres as we once did. So, OOH is making a recovery, but it will be a long time before it can provide the impressions it did in 2019.

Similarly, with radio. Over 50% of the listening hours in 2019 were out of home i.e in the car, on the train, or in the office. We don’t know exactly how many listeners we are short, as the RAJAR radio research survey has yet to recommence. But an educated guess says it’s enough for the industry not to rush back to research and have to publish embarrassing figures.

So, our advice? As with the previous section, lack of supply will exacerbate the increased demand and drive-up media prices this Christmas. So, plan and book early and determine what your “must-have” media properties are this year.

With consumers more vested in this most magical moment than they have been for many years, this is not the year to leave planning Christmas campaigns until October.

There will be more change to audience desires, ability to spend, channels they spend in and the timing of that expenditure than we have seen for a long time. And the best media opportunities may well be like the most popular toys: in short supply by November. The 122 sleeps we have left until Christmas will soon be done and dusted like open doors on an advent calendar, so act now.